Why is Virtual Reality Important? – Everything You Need to Know

People often wonder why Virtual Reality is so important.

Why Is Virtual Reality Important?

Virtual reality (VR) is an important part of the metaverse ecosystem. It helps create the 3D virtual world, which is necessary for building the metaverse.

With VR, users experience immersive environments that would be difficult to achieve in the real world.

Virtual realities place the user inside a three-dimensional environment. Instead of watching a screen in front of him/her, he/she interacts with a world created by the software.

Simulation of human senses transforms a PC into a car into new realities. The only limit to a superb VR experience would be computing power and content availability

Because VR is so common, people tend to overlook it.

Non- Immersive VR technologies feature a computer-generated virtual reality world where the user experiences an illusion of being immersed within the virtual world. Games are one type of non-immersive VR experience.

With this type of VR, you get an experience partially built on a virtual environment. It makes sense for educational and/or training applications with graphical computers and large projection systems, such as flight simulator programs for pilots.

There is currently no completely immersive VR technology, but advances are so rapid that they may be just around the corner. This kind of VR provides the most realistic simulation experience—from sights to sounds to sometimes even olfactive sensations.

For instance, car race games are examples of immersive virtual reality that give the user the feeling of speed and driving skill. They’re used primarily for entertainment and other purposes, but they’re increasingly being used in other fields too.

How Does Virtual Reality Technology Work?

The VR process combines both physical and digital elements to create an experience that “fools” the eyes and mind.

Hardware provides support for sensory stimulation and simulation such as sound, touch, smell, or temperature intensity, while software creates an immersive virtual environment.

Eye and Brain Function and the 3D VR Experience

Immersive experiences mimic how our eyes and brains perceive reality. Our eyes are approximately 3 inches (7.6 cm) apart, so we see things from two slightly different perspectives. Our brains then fuse these two images together to create a sense of “3D” or “stereoscopic.”

With VR applications, instead of seeing one picture at once, you see two identical pictures made to show the opposite sides of the scene.

VR technology tricks the user’s brain into thinking there is a third dimension. Why is Virtual Reality Important?

What Technology Does Virtual Reality Use?

What Hardware Does Virtual Reality Use?

Virtual realities include sensory devices such as controllers, headsets, hand trackers, and treadmills, as well as 3D camera systems.

A VR headset is an electronic apparatus worn on the head which displays images for the user. It usually includes state-of-the-art sound, eye or head tracking sensors or cameras.

There are three main categories of headsets

Some systems broadcast information wirelessly from consoles, computers, or PCs nearby, and some use wired cables worn by the user.

Smartphones do not offer the best visual experience and are underpowered by gaming consoles or PCs. They do not provide positional trackers. The environment is displayed from a single point, so it is impossible to view an object from any angle.

These are some of the accessories used today in VR:

These can then be interpreted by a computer program. Some high-tech models offer haptic feedback or tactile sensations, so they can function as input devices too.

What Software Does Virtual Reality Use?

Virtual reality is a rapidly growing field. It will continue to grow as more companies develop and release VR apps. What VR Games Support Full Body Tracking – Here’s What You Need to Know! 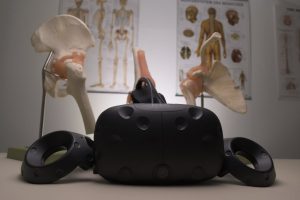 What is VR? – Everything You Need to Know with Helpful Advice & More