What is VR? – Everything You Need to Know with Helpful Advice & More

Virtual Reality- or more commonly known as VR- is a simulation of a three-dimensional image. It’s generated with software and can almost be mistaken for reality if you’re too engrossed in it.

This tech allows you to experience things you never even imagined and be in places miles away from you. While the possibilities are endless with VR, it is mostly used for educational and entertainment purposes.

To get started in the virtual world, you need a virtual reality headset. There is a wide range of options available when it comes to VRs and you’ll surely find the right fit for you.

How to Get Started in VR?

VR can be used for practical training in multiple professions to stimulate dangerous situations that professionals can train with. Life-altering surgeries can be stimulated beforehand to give the surgeon practice or emergency situations can be created for a pilot.

Virtual reality also allows for virtual meetings to take place, even when the participants are all across the world.

VR increases convenience as people can try out things before purchasing. Furthermore, some people even use VR as a way of getting over their phobias.

It’s always better to know what type of content you like. If you find yourself playing video games often, VR games are surely the next level for you. Virtual games are not only fun but also let you enjoy it from a first person perspective.

However, if you often are lazy around and don’t have the stamina for games, you can always try out VR videos. These provide an immersive virtual reality experience that is like none other. From concerts to virtual tours, there are endless genres available.

If you are getting into VR and want to try it out, the basic piece of equipment needed for it is a VR headset. The headset comprises a head mounted device and a screen in front of the eyes. The focal length can also mostly be adjusted to the viewer’s preference.

There is a wide range of VR headsets available, something for everyone. There are three types of VRs available:

If you’re a beginner, smartphone VR is the best option for you. If you’re experienced in the virtual world, you can try out PC VR.

While virtual reality is a great innovation, it does have some negative effects. Often people get carried away and use their VRs for hours in one sitting. This is harmful in the long run as it puts strain on the eyes.

There is also a possibility of addiction in the virtual world. People may lose connections in the real world and depend entirely on something that isn’t real.

There are a few types of virtual realities available:

Now that we know the types, let’s take a closer look at what these entail.

This virtual reality experience is exactly what the name suggests. Viewing a semi-immersive VR is mostly used for educational purposes. You can wear VR glasses to take virtual tours of places you might want to visit but want an introduction first.

If you’re looking for the perception of being physically present in a non-physical world, fully immersive virtual reality is for you. Opposite to Non-Immersive VR, this type of VR makes you believe you’re in a completely different place by using technology.

The technology works by surrounding the user with the sound and visuals of the virtual environment. It allows you to fully experience being there and interact with your surroundings.

However, you won’t be able to achieve this at home as it requires special equipment like VR glasses, gloves, and often sense detectors attached to body detectors.

By using a phone screen and camera, this type of virtual reality makes objects appear on your screen that aren’t physically there. When you point your camera towards anything, like your living room, AR can add any computer generated object like a bird to it.

As the name suggests, this type of VR allows users from different parts of the world to come together. With virtual characters, you can interact with other players as well as the surroundings you meet in. The widely known game, PUBG is an example of collaborative VR.

What is VR and how does it work?

Virtual reality is a way of stimulating the user’s vision to make an artificial environment surround them. The user can then interact with the surroundings. One of the main ways of experiencing virtual reality is through a VR headset.

How much is a VR Headset?

VR headsets come in a wide price range. Depending on your budget, you can find multiple options. Here is a list of headsets that work great with your phone and do not require any additional devices:

How does virtual reality work with phones?

This requires a smartphone VR headset. Users can download multiple VR apps (with a wide range of free ones available). Next, you just have to select one and insert your phone into the VR to get started.

Yes, the technology by which VR works, creates 3-dimensional images that are then presented to the user using a VR headset. There are more advanced VR headsets available in the market as well:

All things considered, virtual reality is a great invention. VR has endless possibilities for the work field and entertainment. Boredom will seem miles away when exploring the virtual world.

Although all inventions do have some negatives, the advantages of VR overpower the disadvantages. Some of them are health problems and addiction. When used with carefulness, however, the virtual world can be a great place.

VR technology is constantly developing, with newer updates and a wider variety. It has plenty of applications and can be used in various aspects of our daily lives. 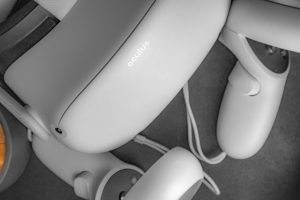 How to Use Boat in Real VR Fishing – Complete Guide with FAQs, Tips, & More