What Is a VR Camera – Step-by-Step Guide with FAQs, Tips, & More

Are you wondering what a VR camera is?

What is a VR Camera?

With a VR headset, you can capture a 360-degree photo or movie from any angle. Move your headset or pointer up, down, or left, or right, and the image moves with you.

You’ll need a 360 virtual camera and a computer or phone to create and watch these videos.

What Is A 360-Degree Camera And How To Use It For Virtual Reality (VR)?

These days, there are so many different types of camera available that let people capture 360-degree images and video.

A 360 camera is an amazing new device that has been gaining popularity for quite some years now. It’s a must-have gadget if you’re into photography.

A 360-degree video camcorder gives you an entirely different kind of viewing experience than any other type of video recording device.

With a 360 camera, you can capture the entire scene from every angle. You can show your audience exactly what you’re seeing and let them feel like they’re there too.

You Can Take It Anywhere

Most 360 cameras these days are small and lightweight, making them ideal for taking pictures wherever you go. They’re not bulky or heavy like DSLR cameras, which makes them easy to carry around.

It may be cumbersome to carry around, but it’s nothing compared to carrying around huge lenses.

You Can Connect It to Your Phone

Like most action cams and recent models of DSLR and mirrorless cameras, 360 cameras easily to smartphones through Wi-Fi or Bluetooth connections.

It makes uploading, editing, and sharing photos and videos from your smartphone easier and faster. Imagine uploading real-life, 360-degree video clips of your vacation on Facebook and other sites supporting VR content.

What Options Are Out There?

Many tech firms keep releasing new models of 360 cameras due to their growing popularity.

There are lots of choices today, and they differ in various ways — price, ergonomic design, size, and appearance — so you’ll be sure to find one that suits your needs.

Make sure to check out different brands of 360 cameras online. You can even read user reviews to determine which is best for you.

They Are Easy to Use

Most 360 cameras don’t need any special setup before they start recording video. You can then control them using your phone.

There are some that are quite complex to setup. Through proper research, however, you can easily avoid purchasing those models.

A 360 camera is an excellent piece of photographic and video gear for anyone who wants to take their hobbies, passions, or careers to the next level. It can be used in any number of ways and lets your creative juices flow freely.

VR isn’t really new technology. It’s been around for decades, and it’s typically utilized for various reasons. For example, in the aviation industry pilots are trained without actually flying an actual plane.

They’re given a simulation environment where they can practice flying in different scenarios.

Essentially, this is what virtual realities are all about — a computer-generated 3D world where you can experience a different type of reality.

How is VR Beneficial to Me?

Many companies have begun investing in virtual reality (VR) technology because of its enormous potential. With VR, they can create a three-dimensional (3D) experience of their products or service; they can also use it for their advertising efforts.

As a customer, you’ll get a first-hand look at what a product or service can do for you.

Gaming has been used for entertainment purposes since the beginning of time. However, virtual reality may be able to offer an entirely new type of thrills for users.

Imagine how much more fun a trip would be if there were some life-like elements added here and there.

What’s the Difference Between VR and AR?

Augmented Reality requires hardware and special equipment for the simulation of an experience. Here’s the main differences between VR and AR.

With VR, everything you see is completely virtual, and there’s no overlap between the virtual reality environment and the real world.

Meanwhile, augmented reality (AR) allows you to create a 3D or 2d environment that overlays the real world. This makes it possible for you to see your real surroundings, but there is also a composite image of graphics and real things.

There is an overlap between the virtual and real worlds.

How Much Will VR Cost Me?

Full VR equipment isn’t cheap, but there are other options available for less money.

There are lots of different types of VR equipment available at various price points, and if you’re interested in making your own VR content, you can even build one yourself. It’s really cool when you think about it!

A 360° VR Camera is an innovative new type of camera that records everything in three dimensions (3D) and lets you watch it on your computer or smartphone. You can use them for many different purposes, including creating immersive experiences and watching videos.

If you have any comments or suggestions, please let us know. 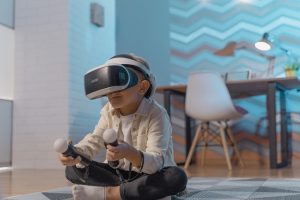 What VR Headset Does Bandoot Use – Professional Guide with Tips